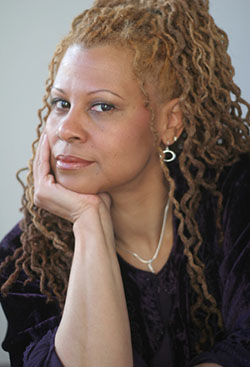 JI: Tell us about your upbringing in Arkansas, and the kind of feelings, sights and sounds you experienced at home.

VN: First of all let me say that Arkansas is a physically beautiful state, with its mountains, rivers and lakes, but sometimes amidst beauty and light, there can be an ugly and dark part. I grew up in Arkansas in the 50's. During that time there was a lot of racism. I remember separate everything as a small child. It was a dangerous time. The kind of feelings that I felt at home however, were warm and supportive. We grew up at that time in a middle class existence. I went to private schools. My father was a trumpet player, but gave it up to worked as a chef to support his family. I remember times when my father would cook up huge meals and relatives and people in the neighborhood would come by. There was always music around my house. My mom was the most eclectic in music choices. She exposed me to all types of art, not just music.

JI: Who or what inspired you to begin serious study and career pursuit as a musician - vocalist?

VN: When I was around four years old, maybe a little younger, I saw this movie called the Wizard of Oz and this singer Judy Garland sang this song, "Somewhere Over the Rainbow", which became the first song in my repertoire. I sang that song all the time. My mom use to let me stay up late at night and watch all the movie musicals or variety shows. I knew then that I wanted to sing, the serious study part began around nine years old. Although I started taking piano lessons around six years old, it really wasn't until I started taking voice lessons around nine years old that I began to dream of being a singer.

JI: What vocalist or instrumentalists have been most influential, and specifically identify how and why?

VN: I've been singing for over 40 years and it wasn't until the last past ten years that I started really listening closely to vocalist. I've always wanted to have my own sound and not sound like someone else, so I figured that if I only listen to and study the instrumentalist, my approach to songs would be more like an instrumentalist and I would copy those sounds tones and qualities as oppose to the sound tones of other singers. I listened to horn players for ballads (phrasing), drummers for time and color, bass and piano for pitch and simplicity.

VN: I've been singing with Michael Franks for ten years now. I am the only back up singer he uses and I perform the duets that he's recorded over the years with other artists. This year, he is releasing a Christmas album that contains all original Christmas tunes. One of the tunes, a duet that I perform with him, is called "Island Christmas". It's an incredible album with amazing tunes with arrangements that are wonderful. I consider Michael Franks one of the few great songwriters around today. He is an incredibly spiritual human being, with this great sense of humor and a he's a remarkable story teller. I feel very blessed to have had this opportunity to work with him over the years and to learn so much from him. 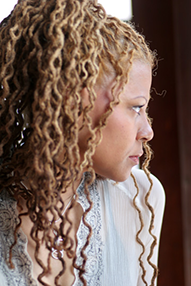 JI: Tell us about Travis Shook and how you met.

VN: What can I say about Travis? Genius. Innovator. He is truly an original. We met at a Jam session at the Iridium. He ended up being the keyboard player to play for me when they called me up to sing. We played the tune, "You Don't Know What Love Is". It was if we had been playing music together for years. The synchronicity was mystical. I can't begin to say all the things about him that fully represents just how incredible I think he is as an artist. That would require more space than is allotted for me here.

JI: What is your source of inspiration, or ideas for lyrics in general, and for specific tunes?

VN: Most of the time I have to have some type of obsession going on before I can write a tune. And the lyrics, most of them all deal with love, desire, longing. Specific tunes on the other hand, usually, I look for strong melody and words that I can relate to. The content for me can be just about anything as long as it represents something in my life that is real to me. What I do as a singer rests strongly on intention. So, if I don't know what I'm trying to say, neither will anyone else listening to me. Personally, I don't write enough and the stuff that I do write, I don't feel that it's very good. It's difficult for me to write when I sing songs written by Abbey Lincoln, Michael Franks, Steve Wonder, Stephen Sondheim, not to mention all the "Songbook" material that everyone's recorded that were written by Ellington, Porter, Gershwin ... but, they say practice makes perfect, so I just keep doing it.

JI: What kind of practice do you do when you are not publicly performing, and what purposes or goals do you have in mind when you practice? VN: I don't really practice singing at home like as I should. My practice is my working specifically on tunes, arranging. I'll run some scales. I just started learning how to play the double bass and I practice that and use that now for my singing, for pitch and music education. I really do the true practicing when I'm actually performing, because no matter what I work on at home, when I do it live, it will change due to the eternal environment or my own internal environment, such as how I'm feeling, if I had a good day or bad day.

JI: How do you deal with the dilemma we all run into from time to time of dealing with musicians or people in general who claim to be quite sensitive, but unbeknownst to themselves are insufferably self-absorbed?

VN: The word here is "unbeknownst"; everyone has their own reality, their perception that assists them through this life. What might be red for someone else could appear burgundy to me. We don't know how not to be absorbed with ourselves, since everything is in relation to us as each individual. The best way for me is to keep myself open to new experiences and more than anything, new ideas. To always feel that there is something for me to learn from someone or something.

JI: What authors, artists, philosophers or others have significantly influenced you? How?

VN: Bhagwan Shree Rajneesh has been an incredible influence on my life. His objective view on all types of spiritual and philosophical concepts eventually led me to practicing Nichiren Daishonin Buddhism. Being an avid reader, I have read quite a lot of books on so many different topics, ranging from theology, to physics, to classics, to horror and science fiction, to biographies. I guess what I'm saying is, I have read and will read just about anything. I also am a little bit of a film buff. And I have quite a few friends who are painters, sculptures. In other words, I'm extremely experimental in my view of the world.

JI: If there is a profound quote or idea (or more than one) that has significantly influenced you? How?

VN: Music for me is part of living; it is one of the processes by which I communicate my feelings and ideas to others. The idea of living without it would mean that it was something separate from life, something outside of me. Success can be view in two ways, one it being something outside of you or it being a thing that you can possess. My 'success' is a personal thing, a sense of well being, of being in balance with my desires and my actions.

JI: What are elements do you think we each need to feel successful? What do you need? What if anything is missing?

VN: Health is the first thing on the list, since my body is my instrument, it's important that I take care of it, so I workout, eat well and stay away from as many poisons as I can. Next is the spiritual element. This is my code for my life, my rule book, so to speak. From these two I begin to allow my dreams to dictate to me the possibilities for my life, for example, what type of relationships I want to have with others, what kind of lifestyle I want to live, how much money do I want to make, what actions do I take to support my environment, my community, what kind of artist do I want to be. Nothing is missing, we contain all.

JI: How do you stay balanced - as an artist, as an individual - and nurture deeper meaningful ideas and feelings in this contemporary society in the face of the incessant stress and sensory overload the surrounds us?

JI: "Good people are good because they've come to wisdom through failure," stated William Saroyan. How have you experienced that in your music? In your life?

JI: In a couple of sentences, how do you want your music to influence people - what do you want it to say or do?

VN: I want my music to inspire and empower people to reach for the highest and most sincere place in their hearts and to act on that for the benefit of themselves and others.

JI: What if any is the connection between music and spirituality?

VN: A couple of definitions: 1. Of relating to, consisting of, or having the nature of spirit; not tangible, not material. 2. Of concerned with, or affecting the soul.