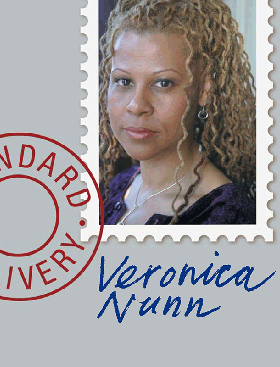 Though Standard Delivery is only Arkansan Veronica Nunn's second album as a leader, she has been working steadily with the disc's trio of intelligent players – pianist Travis Shook (who is also Nunn's husband), drummer Jaz Sawyer and bassist Jennifer Vincent – since 1993, and the tightness that only time and mutual respect can achieve shows on all 13 tracks. Plumbing the standards catalog, Nunn sticks to the tried-and-true with such oft-recorded chestnuts as "Surrey With the Fringe on Top," "I Can't Give You Anything but Love," "That's All," "More Than You Know" and such.

But Nunn, whose warm, slightly husky sound sometimes suggests the overt seductiveness of Marilyn Monroe (most notably on her mink-lined "If I Had You"), other times hint at the breathy coziness of Julie London, yet also echoes the crystalline purity of Dianne Reeves, can make the stale sound fresh, the familiar sound arresting. Particularly enticing are her "I'm Old Fashioned," cheery as a country fair, a percolating, bongo-driven "Thou Swell" that, for the first time in ages, makes that tired Rodgers and Hart tune appealing and, on another dip into the Rodgers and Hart songbook, a satiny "Where or When" that oozes with pent-up desire.