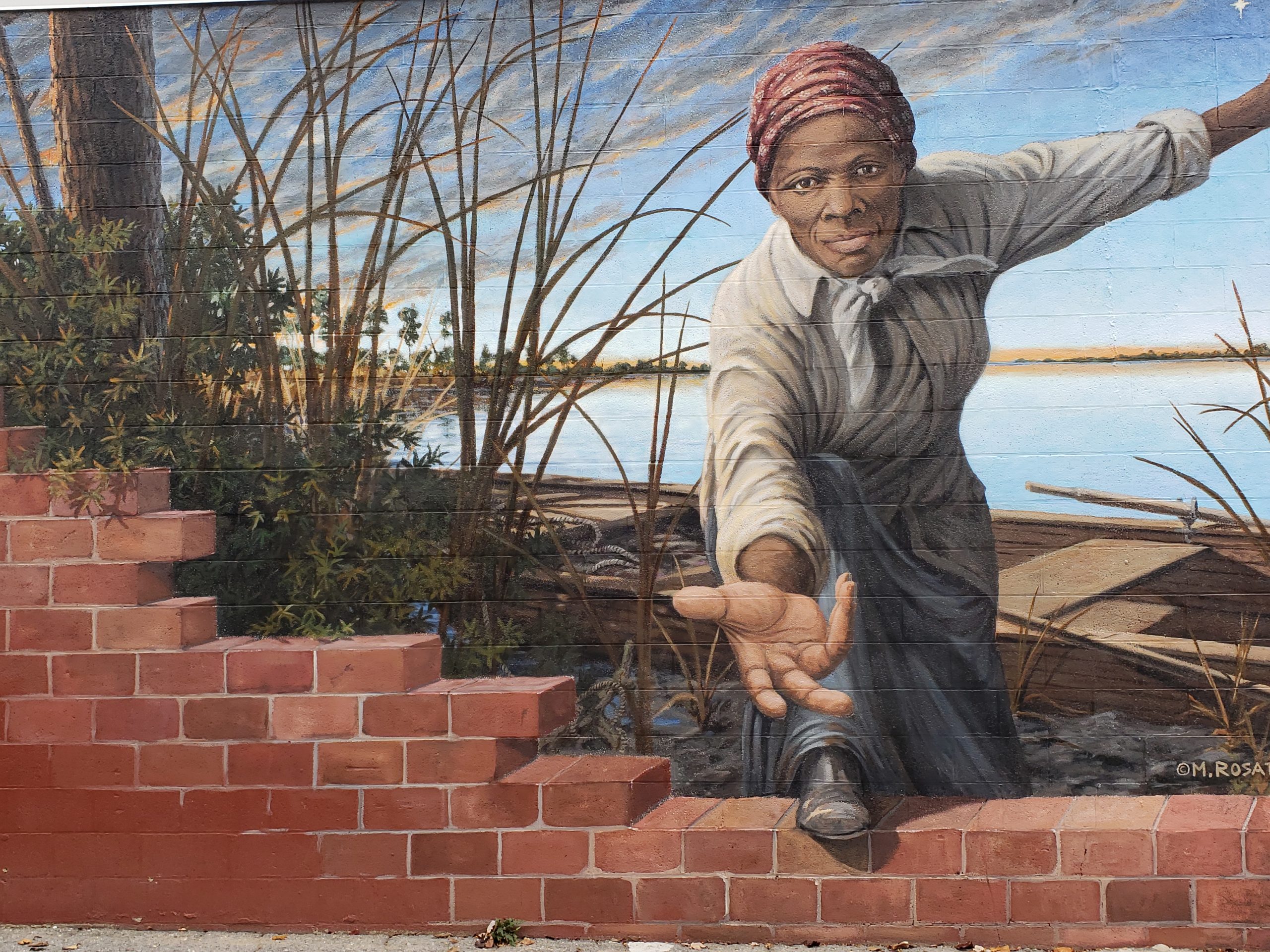 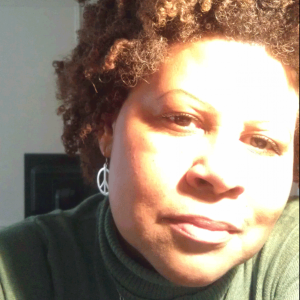 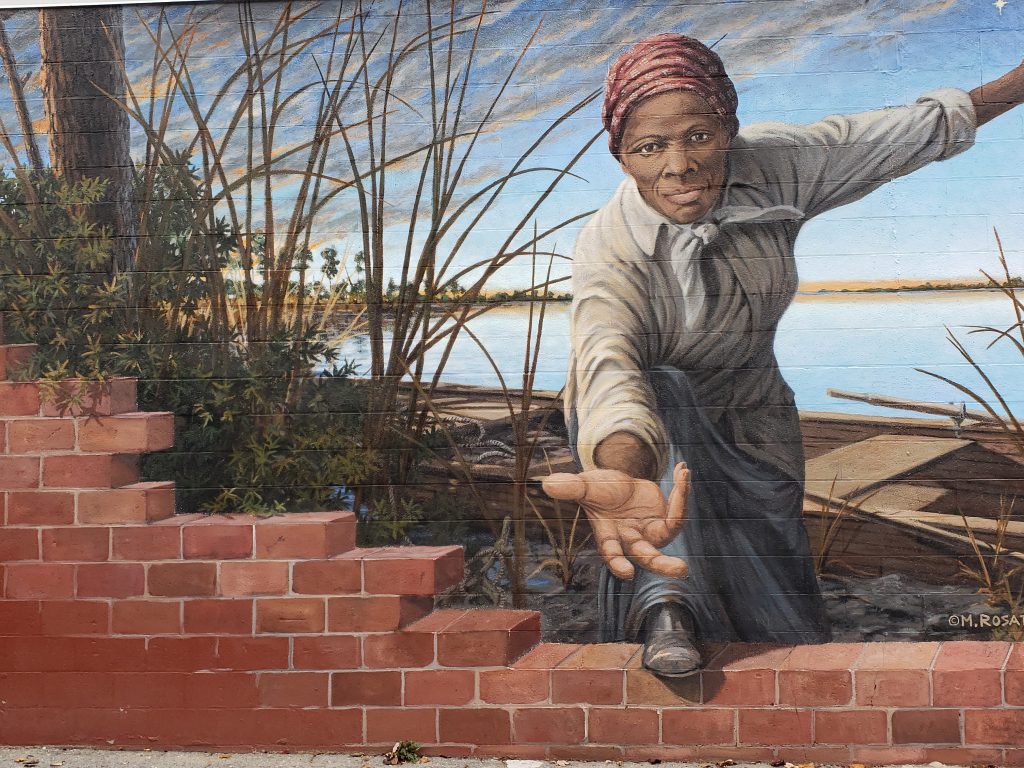 For most of my life, I have traveled extensively and quite frequently. Always on the go whether it was local traveling from within the city of New York, borough to borough or state to state, even country to country. I guess like all people encased inside the web of the two and half year pandemic, in October 2021 I started to feel the effects of being in one place for more than a week and felt the need for a mini excursion trip. The adventure of course had to be embarked upon with minimal to no other human contact. It also had to be far enough away that it felt like a journey, a ‘getaway from at all trip’. Also since I was dragging Travis along, it needed to be something that he also wanted to do, although he just likes the idea of getting out of the house and having an excuse to at some point get pancakes somewhere along the way. I always wanted to visit the birthplace of Harriet Tubman (born Araminta Ross, March 1822), so that became my destination. I believe everyone in the world knows who Harriet Tubman is, but I don’t think people really know much about her life, at least I know I didn’t.  The most publicized details of her life of course were that she was born into slavery, escaped and became a “conductor” of the Underground Railroad.
I am not alone, in wanting to know more about the life of this fearless woman.  As of late, there has been more information shared about this phenomenal human being. If you can’t make a trip to her birth town and follow her journey, on October 4, 2022, there is a PBS documentary on both her life and the life of Frederick Douglas. 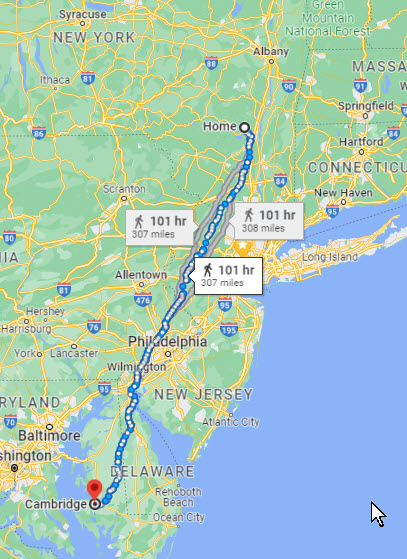 Based on my limited knowledge as well as living in upstate New York meant that if I were to visit her birthplace, I would probably be traveling way down south, or so I thought. It’s interesting how I have always associated only the deep south with slavery. After doing my research in preparation for the trip, you know, the travel route, hotels, how long a stay in each place to ensure a thorough yet not exhaustive view of each location, I found out that her birthplace was not as far away as I had thought and that not only was it not far away but not at all what I expected. She was born in Dorchester County in Cambridge. Maryland only 325 miles away from Woodstock, 5 hours and 47 minutes if you were driving. 108 (4.5 days) hours if you’re walking it.

We were still in the middle of the pandemic and I was apprehensive about activities that required spending time inside. Usually, activities to explore the life of historic figures centered around being in an enclosed space such as a museum. I was fortunate enough to come upon – Harriet Tubman Byway, a scenic self guided driving tour. This fascinating and visually informative byway winds for 125 miles, beginning on Maryland’s Eastern Shore, Dorchester and Caroline Counties, continuing for 98 miles through Kent and New Castle Counties in Delaware, then on the Philadelphia.

I really wanted to experience her life story by walking and traveling the land where she grew up, and escaped from to find freedom. All the little points along the way that helped shape her vision and intense desire to liberate herself and the courage to return to do the same for others. 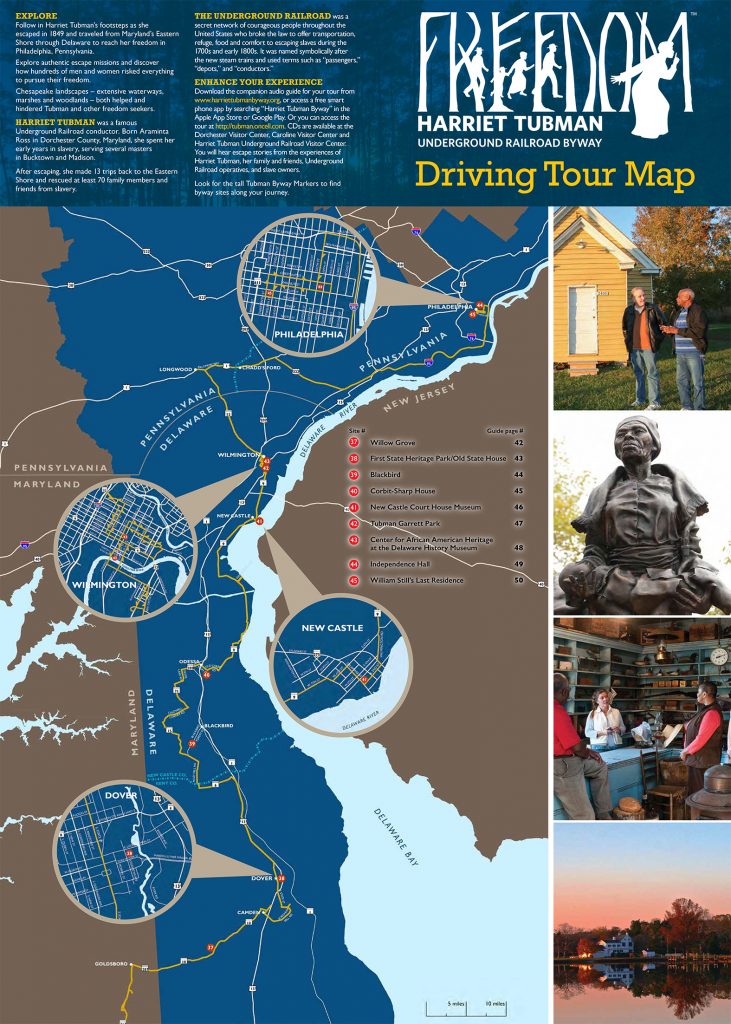 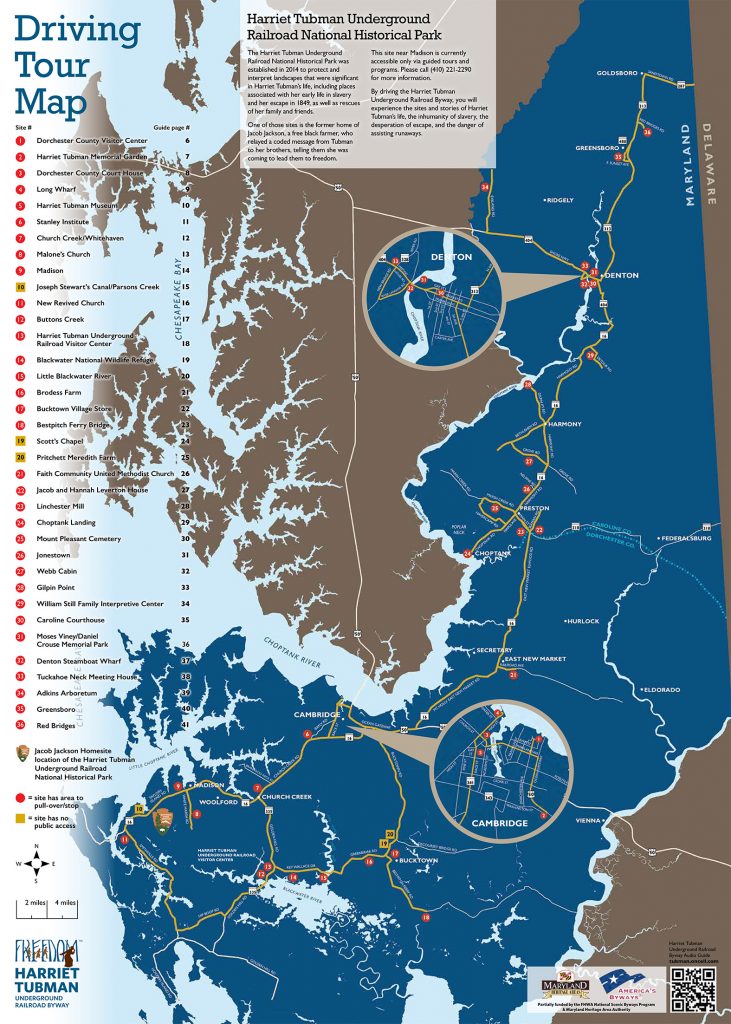 To speak to my expectations, as I mentioned, I have some extensive traveled around the world and the United States. When in another country, however, that country’s history and culture seemed “more”. For example when visiting Rome, Italy; Paris France; or Istanbul, Turkey.

The constant reinforcements of how significant, amazing and important these places were influenced how I documented them in my mind/my experience. And to add to that, they were “foreign”, otherworldly. Visiting places in the United States, historically was not given much pomp and circumstance, probably because our U.S. history/civilization (not the North American continent’s history/civilization) is minuscule (400 years), compared to Africa’s civilizations: Kerma (2500-1500 BCE) 1 ; Nok what is now located in central Nigeria is estimated at this time to have developed as early as 1500 BCE.  2;  Kush (1070 BC)3; Aksum (3rd & 4th century CE) what is now Ethiopia 4.

The Great Wall of Benin, is believed to have been constructed between the thirteenth and mid-fifteenth century CE 5, four times longer than the great wall of China and raised to the ground by British troops in 1890. 6. And if you want to debate that, then let’s look at something you can believe…… 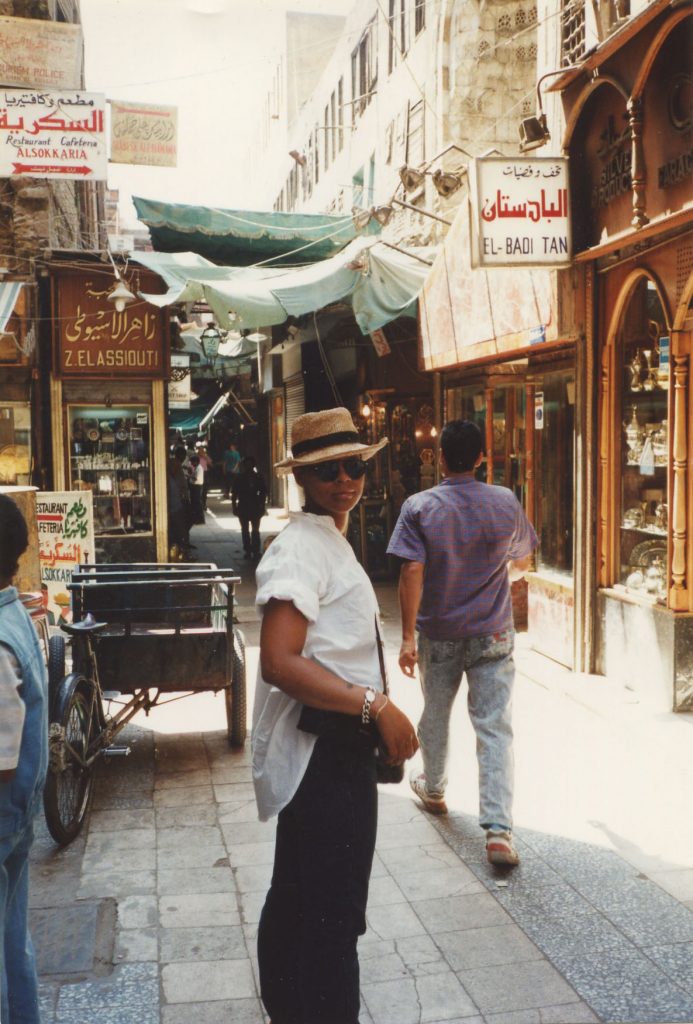 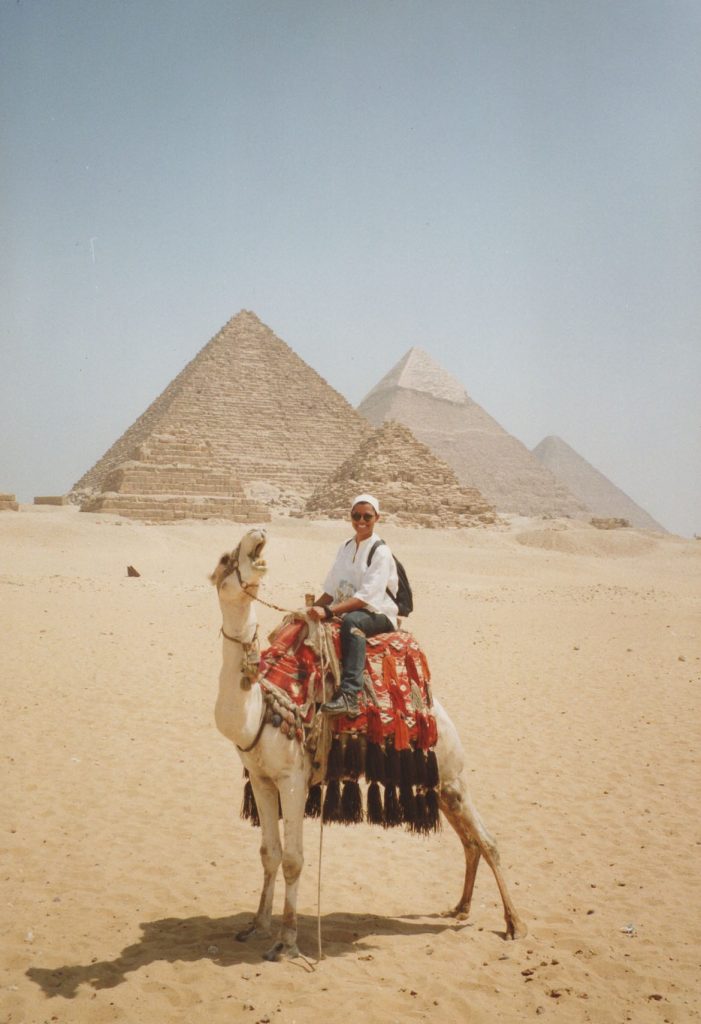 But enough of that. Back to the trip…. Dorchester County MD. Travis joined me on our 3 days trip. Looking back, I realized why it’s important to keep a journal when traveling. It helps you remember specific details of your first impressions at the time when the event is happening. For me now, writing about this trip basically a year later, I realized that there was so much that I experienced but my memory has faded considerably since then. Luckily I took lots of photographs and video. So this blog post is going to be different in that I’m going to share my experience via the images all put together in a vlog format.

Almost every one of our “first day of vacation” trips the weather is usually cloudy, gray and/or raining and this day October 11 was no exception. The forecast did predict that there would be some sunny days. And that was good enough for us, although it was rainy and mostly cloudy and overcast the whole trip.

We decided that we would follow the byway map and headed straight for the #1 location – Dorchester County Visitor Center. From there we moved to each number location as we wound our way up towards Philadelphia. We strategically mapped out our days and coordinated our hotels to accommodate 1/3-way points along the route.

There was so much to take in and although I documented quite a bit, I am unable to roll out all that we discovered. I can highly suggest that if you have a chance to “take that walk”. I strongly suggest that you do. I’ve added a slide show and a video in the hopes of presenting you with a bit of what I saw through the lens of my mind and of course my camera. I will at some point put up more of the images from our trip on my SmugMug site.

There were many different routes that enslaved people took as they traveled north to freedom. One route out of Maryland was that frequently used by Harriet Tubman. She led her groups, beginning on foot, up the Eastern Shore of Maryland and into Delaware. Several stations were in the vicinity of Wilmington, Delaware. From Delaware the group traveled on to Philadelphia or other places in southeastern Pennsylvania. From there, many traveled further north. Some settled in Massachusetts or New York. Many continued through New York state and on into Canada. 7

There were 45 stops on this Harriet Tubman Byway  and our three-day trip wasn’t enough time to explore it all. I believe we were able to visit 39 of the listed destinations. Some we just we drove there, stop briefly took some pictures and videos, while other places we explore in more depth.

I still haven’t cataloged all of the video footage or photographs that were taken on this vacation. As I go through them I will add them to my Harriet Tubman Folder on SmugMug and send out a notice on a social media platform that some new stuff is added and you continue exploring with me if you so desire.

History, is really what we remember and of course the best history is what is documented. Still we must keep in mind that each person who ascribes history always do so from their unique perception. A perception that is colored and framed by all of their own personal experience, their personal history. This experience is embellished with human feelings, fear, happiness, loneliness, jealously, admirations, greed, ignorance, pride…..

Interestingly just by writing this blog and posting it on social media accounts I am documenting my history. Even using images to prove the point and over time, maybe some future younger generation will read and view the images and put together their “understanding” of this. What will that be?

Some excellent historic videos to check out on YouTube: